On June 06, 2018, the Nomadic Empires team welcomed Professor Beatrice Manz (Tufts University, USA), who specializes on history of the Mongol and the Timurid Empires, and Professor David Morgan (SOAS and formerly University of Wisconsin-Madison, USA)—a historian of the Mongols and the medieval Middle East. Professor Manz presented a workshop titled: Tribes, Armies and Empires:  Social Morphology of Pastoral Nomads in the Mongol and Timurid Periods, where she addressed the changing structure of nomadic social groups from the rise of the Mongol Empire to the Timurid Period. The workshop focused in particular on the theme of nomadic, tribal, and mixed armies, and their creation, development, and dispersion during different historical cases and phases of centralized rulership and its collapse. Professor Manz first examined the creation of Chinggis Khan’s army, then she traced the trajectories of such tribal groups as the Jalayirids and the Oirats during the Ilkhanid Period, and the subsequent restructuring of armies during the Timurid Period, when Timur implemented his strategy of suppressing tribal power.

The workshop participants had a detailed discussion about current terminology with regard to nomadic social morphologies (such as tribes, clans, lineages, armies, empires, etc.), their genesis and strategies of affiliation, leadership, and endurance (kinship, marriage alliances, hereditary offices and positions, incorporation and diversity, personal followings, forced displacements, etc). In the afternoon, discussion continued about the varieties of armies employed and engaged by nomadic empires. The focus was on the issues of logistics, provisions, demographics, geographies of incorporation and dispersion of tribal and non-tribal contingents of these armies, as well as the role and participation of women in wars waged by nomadic empires.

On May 25th-26th 2017, research associate Dr. Marie Favereau participated in an international workshop organized by Dr. Konstantin Golev (Sofia University “St. Kliment Ohridski” /Comenius University in Bratislava) held at the Center for Advanced Study, in Sofia. The workshop was focused on ‘Mongol Warfare between Steppe and Sown: Military and Cultural Perspectives’. It drew together expert historians of the four Mongol khanates, including Prof. Michal Biran (The Hebrew University of Jerusalem) who delivered a keynote lecture on ‘The Chaghadaid Army in Comparative Framework’. 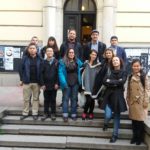 Dr Favereau’s paper on ‘The Golden Horde Economic Warfare’ aimed to demonstrate that the Jochids won more decisive victories on the market field than on the battlefield. In her talk, Dr. Favereau tested her working concept of ‘Mongol economic warfare’ – a concept she develops in the book she is writing within the framework of the Nomadic Empires project.

During May 28th-29th, Dr. Favereau carried out field research in the centre and south of Bulgaria. Dr. Favereau was accompanied by the local medievalist Dr. Konstantin Golev who is a leading expert on the Qipchaqs. They visited several important historical and archaeological sites associated with the events of the Mongol invasion in Europe, including passes in the Central Balkan Mountains and the capital city of medieval Bulgaria, Tarnovo.

Research Associate Marie Favereau spoke at the V International Forum of the Golden Horde Studies organized by the Sh. Marjani Institute of History of the Tatarstan (Tatarstan Academy of Sciences), held in Kazan on 15th-18th March. More than a hundred scholars from 18 countries were invited to discuss their work on the history of the Golden Horde and the Tatar Khanates.

Dr Favereau took part in a roundtable session organized by Director Rafail Khakimov on “the Golden Horde and the Silk Road” with leading experts Michel Balard, Mark Kramarovsky, Uli Schamilogu, and Daniel Waugh. Dr Favereau presented her research results on the Pax Mongolica. Her paper entitled “Trade, Peace and Diplomacy: Economic Integration in Eurasia under the Golden Horde” dealt with the new forms of long-distance trade the Mongols had created to stimulate and control the economic exchanges in their empire and beyond its frontiers, especially with the Mamluks, the Byzantines, the Venetians, and the Genoese.

A roundtable session entitled the “Empires of the Plains: A World Historical Perspective” was organized by the director of the project Pekka Hämäläinen at the American Historical Association (AHA), in Denver, CO, USA on 6 January, 2017. The members of the project team presented their research on nomadic empires, which was followed by comments from Jonathan Skaff, and an open discussion with the audience. 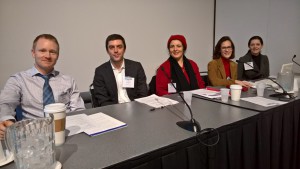 The main focus of the panel was on the processes of connectivity, mobility, action, and exchange which were the basic mechanisms for building nomadic empires and for their longevity. The presenters explored the concepts of “kinetic empires,” “empires of mobility,” nomadic “peace,” kinship, and sovereignty and placed them within a comparative perspective while discussing their individual case studies: the empires of the Lakota, Xiongnu, Blemmyes, Khazars, Golden Horde, and Rumi nomads. Numerous questions from the audience expanded this discussion further into the spheres of nomadic economic sustainability, physical and sacred geography, the silk and fur trade, the nature of the “shape-shifting abilities” of the nomadic states, such as from pastoral to “amphibian” polities.

Abstracts of the panel papers are available here: https://aha.confex.com/aha/2017/webprogram/Session15219.html

On September 12th  2016, Professor Hans Barnard (UCLA Cotsen Institute, Los Angeles) presented a workshop to the Nomadic Empires project team on the theme and phenomenon of movement from an archaeological and phenomenological perspective. Professor Barnard combined a wide-range of approaches to understanding the central concept of movement in nomadism and society in general. The discussion related not only to the historical and nomadic movement of peoples, but also cognitive approaches of movement and the autonomy of movement, while paying reference to a great number of exemplars from various cultures and social settings. The lecture explained how the phenomenon of movement is shaped by various societal and human factors, and also how movement can shape individual cultures and their dynamics. Archaeological findings relating to Professor Barnard’s research on nomadism in the Eastern Desert of Egypt and Sudan were also discussed in the afternoon session, especially in regards to the social dynamics of movement and nomadism amongst desert pastoralists and issues relating to the freedom of movement in pastoralist cultures.

The next day, the group continued the discussion in an artefact-study at the Ashmolean museum, where objects relating to differing Nubian and nomadic cultures (the Pan-Grave, C-Group, X-Group) were discussed in the context of movement. The museum session focused on faunal remains originating in cemeteries in Nubia, and how these remains might relate to the symbolic importance of animals in pastoralist settings. This session also dealt with the distinctive material ‘toolkit’ of pastoralists in the context of nomads on the Nile.

On October 18th the team took part in a workshop, with the aim of  studying Inner Asian material culture in connection with three different forms of exchange: trade, religion and knowledge.

The invited speaker was  Isabelle Charleux, a leading expert on the history of art and architecture of Inner Asia, from the thirteenth to the twenty-first century. Her research interests focus on Mongol material culture at the Chinese frontiers, Mongol Buddhist art and pilgrimages, Buddhist architecture in Mongol society, the visual representation of past and present ancestors and figures of authority in the Mongol world, and the interactions between Mongol, Tibetan and Chinese Buddhism(s) in China.

At the morning session, led by Dr Charleux and Dr Lyce Jankowski Sackler (Fellow in Chinese Numismatics at Worcester College and the Ashmolean Museum of Art and Archaeology), we discussed the concept of “Silk Road”, first coined by a German geographer in the nineteenth century, and today widely used. As a result of this discussion we all agreed on the fact that historians and archaeologists need to revisit this notion – a collective task for the Nomadic empires team members. Dr Jankowski guided us through the Ashmolean galleries, highlighting the most interesting items of the collection. We focused on the means of exchange in Eurasia, between the Tang period and the Ming period, such as coins, lingua Franca, and knowledge transfer (especially metal craft, food and medicine). We ended our session on the question of maps and ways of mapping routes across Eurasia. We discussed more specifically a range of trade itineraries, human migrations and pilgrimages – a topic on which Dr Charleux has crucial expertise.

The afternoon session was led by Dr Charleux and focused on power representations in Inner Asia. She opened the session on the symbols of power used by the Mongol khans. These symbols were linked to Tengri (Sky), the cult of the ancestors and Buddhism. We looked at the terminology connected to the act of worshipping in Mongolian: sülde (vital force), onggon (shrines containing relics or portraits), qara sülde, tsagan sülde (black and white standards). We discussed the various aspects of the worship of the black and white standards in the Ordos (today’s inner Mongolia, China). The white standard is still the symbol of the Mongol nation. We compared the Mongol native notion of Tengri/ Sky-God and the imperial Mandate of Heaven under the Chinese and the Türks. Then we studied a wide range of effigies of Chinggis Khan (two dimensional portraits, statues), we listed their political and religious uses and looked at their development from the thirteenth to the twenty-first century. We tried to date the shift from the original cult of the ancestors to the personal cult of Chinggis Khan. Finally we examined the late development of this cult under the influence of Buddhism and in connection with the rising political role of the Dalai-Lama.

In May 2016, Nomadic Empires research associate Marie Favereau was one of the co-organisers of an international workshop at The Hebrew University of Jerusalem entitled ‘Diplomacy in the Age of Mongol Globalization’.  The programme included speakers from New York University, The Hebrew University, and the Hungarian Academy of Science, and Dr Favereau spoke on ‘The Dangers of Diplomacy: The Case of Toqtamish khan at the End of the Fourteenth Century’.  A copy of the programme can be seen here: Diplomacy in the Age of Mongol Globalization.

On June 4 research associate Irina Shingiray will give a paper entitled “Nomadic Influence on Religious Identity in Azerbaijan: The Case of Shia Muharram Rituals” at the Regional Conference of the Central Eurasian Studies Society (CESS) in Kazan, Tatarstan, Russia (June 2-4). The full conference programme can be seen here.

The Nomadic Empires project is delighted to announce that Dr Julien Cooper has joined the team as Research Associate.

Julien Cooper is an Ancient Historian and Egyptologist, specialising in Egyptian language and historical geography. His research has focused on analysing Pharaonic Egypt’s peripheral frontiers, particularly the Eastern Desert and Red Sea regions. He holds a PhD from Macquarie University, Sydney, and has conducted epigraphic fieldwork in Luxor, Egypt as well as northern Sudan.

In his current research within the Nomadic Empires Project, he is studying the nomadic cultures of Northeast Africa in the First Millennium BCE until the Arab invasion of Egypt (c. 640 CE), studying such groups as the Medjay, Nobades, Troglodytes, and Libyans with a special focus on the Blemmyes of the Eastern Desert.

A full profile of Dr Cooper can be seen here.